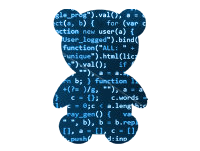 Coding Toy Teaches Future Software Developers – Basic coding for tots!We all understand the growing concerns regarding the technical workforce – the need for software development resources is growing at a pace that the current universities cannot match. There are several interesting strategies that have been discussed, and this article shows the trend to start people on the technology path VERY early in their career explorations – between ages 3 and 5.

Get them started young!