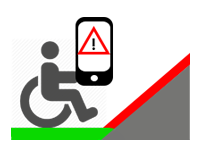 Accessibility Maps for Cities – Mobile app a game changer for the wheelchair boundThe AccessMap mobile app out of Seattle, also expanding to other cities, shows what can happen when disparate sets of data are brought together to facilitate how to best navigate a city in a wheelchair. The idea grew out of a city-sponsored civic hackathon. “AccessMap shows street steepness (green for negligible slope, yellow for moderate, red for steep), curb ramp locations, elevators, bus stops and construction sites.”