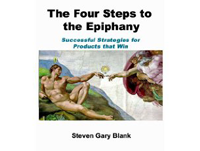 Book Recommendation – The Four Steps to the EpiphanyWhen it comes to your customers – if you already know all the answers, you can completely skip this. However, if you find sometimes find aspects of selling cool new stuff into your market confusing, this book will provide some clarity or at the very least give you some techniques for finding clarity.

Have days where you find yourself banging your head against the wall trying to figure out whether your customer is an early adopter, who just needs to be heard before they buy, or a mainstream customer who will never buy the cool new thing?

It’s in times like those that I have that light bulb moment (followed by the smack on the forehead): This problem sounds painfully familiar. I go to my bookshelf, pull down The Four Steps to the Epiphany, and I’m reminded (you will be, too) that I’m not the first person to tackle this particular problem. There are tried and true solutions. Now if only there were a book to help me to remember this faster!