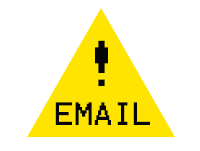 Is Emailing Effective? New study says, “Proceed With Caution!”We all know tone gets lost in emails – if they ever arrive at their intended destination at all. (Attack of the overactive SPAM folder!)

This research study by Harvard Business Review contributes to our understanding that face-to-face communication is best – we would say followed by a phone call and email as a last communication channel – if you care to be the most effective you can be!