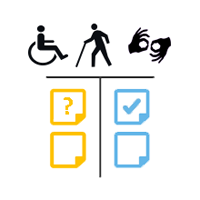 We wanted to share an article by Jeff Kline of Texas Department of Information Resources today on the importance of accessibility testing. Mr. Kline’s description of accessibility best practice for IT consumers is something we at Cooper, as IT providers, take very seriously. This article offers some very good ideas, and the Texas Department of Information Resources (DIR) website also provides a broad set of tools, techniques, and resources for all of us in the technology community.